UFC 2 Transitions, 4 things you should know

Learn about blocking and reversing UFC 2 transitions in this web tutorial. Below we will go over four important things to know about the game. I hope this helps you master EA Sports UFC 2.

1. Watch  your opponent for visual cues 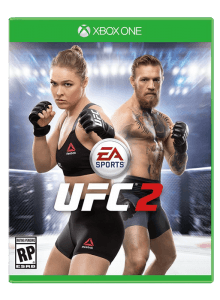 Get UFC 2 on Amazon

UFC 2 transitions and throws can happen at the same time; who will win is determined by attributes and stamina. Here you will see what happens when both fighters are transitioning at the same time. If the fighter on the bottom wanted to have blocked this transition, they would have use RT/R2 and right on the right analog stick as per the yellow cue. For the attacker, as I am completing this transition, I am holding down RT/R2 and left on the right analog stick as per the cue in green. This will cause an instant block or even a reversal in some situations so look out for it on offense and defense.

The clue here is the hands on my hips and the attempt to push me off with knees. This is defended by pressing RT/R2 and up on the right analog stick. You will see it a couple more times afterwards.

When trying to defend your position, consider the options the other fighter has. Not including get-ups, most of the transitions can be defended with either left or right on the right analog stick and RT/R2. For example, out of half-guard bottom, I know the other fighter will usually go for full guard (right here) which is defended with RT/R2 and right on the right analog or backside(left). Getting to know all of the animations for transitions, escapes, and other moves, will aid you greatly in knowing what direction to hit in addition to RT/R2.

How quick your ufc 2 transitions are and your likelihood of getting reversals is based on your ground game rating, stamina, and fighter style. A block and a reversal are done the exact same way; however timing is the determining factor for reversals. You either have to guess correctly, or hit the block nearly at the same time as the person attempts to transition.